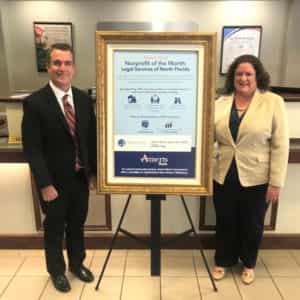 LSNF Executive Director Leslie Powell-Boudreaux has been working within legal aid programs for 24 years. A long trail has led her to her current position at Legal Services of North Florida (LSNF), beginning at a young age, when Leslie wrote a letter to her parents about equality between her sisters. Although she wouldn’t know it at the time, the idea of fighting for justice would be one that informed many of her decisions.

Throughout school, Leslie had an interest in politics, particularly in the historical context surrounding political decision making. She participated in Model United Nations and the Close-up program, furthering her education in how governments make decisions, the path to those decisions, and eventually becoming interested in how law is part of the many decisions that shape our history. She was able to navigate those fundamentals of law when she was President of the Student Senate as an undergraduate at North Carolina State University. “I learned that law is and can be a tool to solve problems,” said Leslie when recounting her formative years, “This tool can be used to shape issues, solve problems, and it is a tool in affecting real change.”

Leslie’s passion for advocacy and representing underserved populations didn’t stop at student government. She worked her way through law school at the National HIV/AIDs Hotline at a crucial time for those affected. “Magic Johnson had just announced that he had HIV and suddenly the conversation changed,” says Leslie. She was the co-founder of the Carolina HIV/AIDS Legal project at the University of North Carolina School of Law. To this day, Leslie believes that her work with the hotline was the real preparation for working with those in crisis who walk into legal services offices every day.

Knowing that her path from law school was one of problem-solving and helping others, she joined the team at Legal Services of Greater Miami (LSGMI). Growing up in a world that was trying to solve injustices, LSGMI allowed Leslie to practice law with a mission. She served as manager of the Disability Law Unit and the AIDS Legal Advocacy Project, ultimately becoming the Senior Attorney for the Employment and Economic Security Unit. In 2004, Leslie came to Pensacola, Florida where she joined the Legal Services of North Florida team as a Senior Attorney for the newly opened Pensacola office.

Under her leadership at the Pensacola office, they responded to multiple disasters that directly and greatly impacted the Escambia and Santa Rosa Counties. In 2004 Hurricane Ivan hit, causing massive structural damage to homes and city property. The whole of Pensacola came together, along with private attorneys, to create a network and helpline for so many who were going to need help. Legal Services Corporation saw the volume and need for the area and with Leslie at the helm of Pensacola. The office grew from just one attorney to 5 attorneys to accommodate the mounting and unmet needs in the community. After 11 years of cultivating the networks in West Florida, advocating for low-wage earners and small businesses in response to the 2010 Deepwater Horizon oil spill, litigating for homeowners through the foreclosure crisis, and continuing to aggressively fight for the rights of our most vulnerable populations, Leslie was selected by the LSNF Board to become the next Executive Director. During a transition year as Deputy Director, Leslie trained and learned even more about the organization under the incredible leadership of Kris Knab. In September of 2016Leslie officially took over as the Executive Director.

Throughout Leslie’s career, there has been a clear trajectory of helping people. “I don’t think I sought out fighting for justice., but that was the world I grew up in. It’s how I was raised. You help people, point out when things are unjust, and work toward bringing equity and justice. It’s what you’re supposed to do,” says Leslie as she recounts how she got started in legal aid. Often you may find Leslie at a veteran’s outreach program or providing advice to staff attorneys. Finding the balance between running a large organization spread across 16 counties and staying tuned into the needs of those LSNF is obligated to help, can be difficult, but Leslie expresses, “It’s important to me that I don’t lose sight of who we’re helping. At the end of the day our mission is to bring justice to those who would not be able to achieve it, but for the work of the stellar team at LSNF.”